The Stratospheric Observatory For Infrared Astronomy (SOFIA) is an 80/20 project of NASA and the German Aerospace Center (DLR). SOFIA is a modified Boeing 747SP aircraft carrying a reflecting telescope with an effective diameter of 2.5 meters. 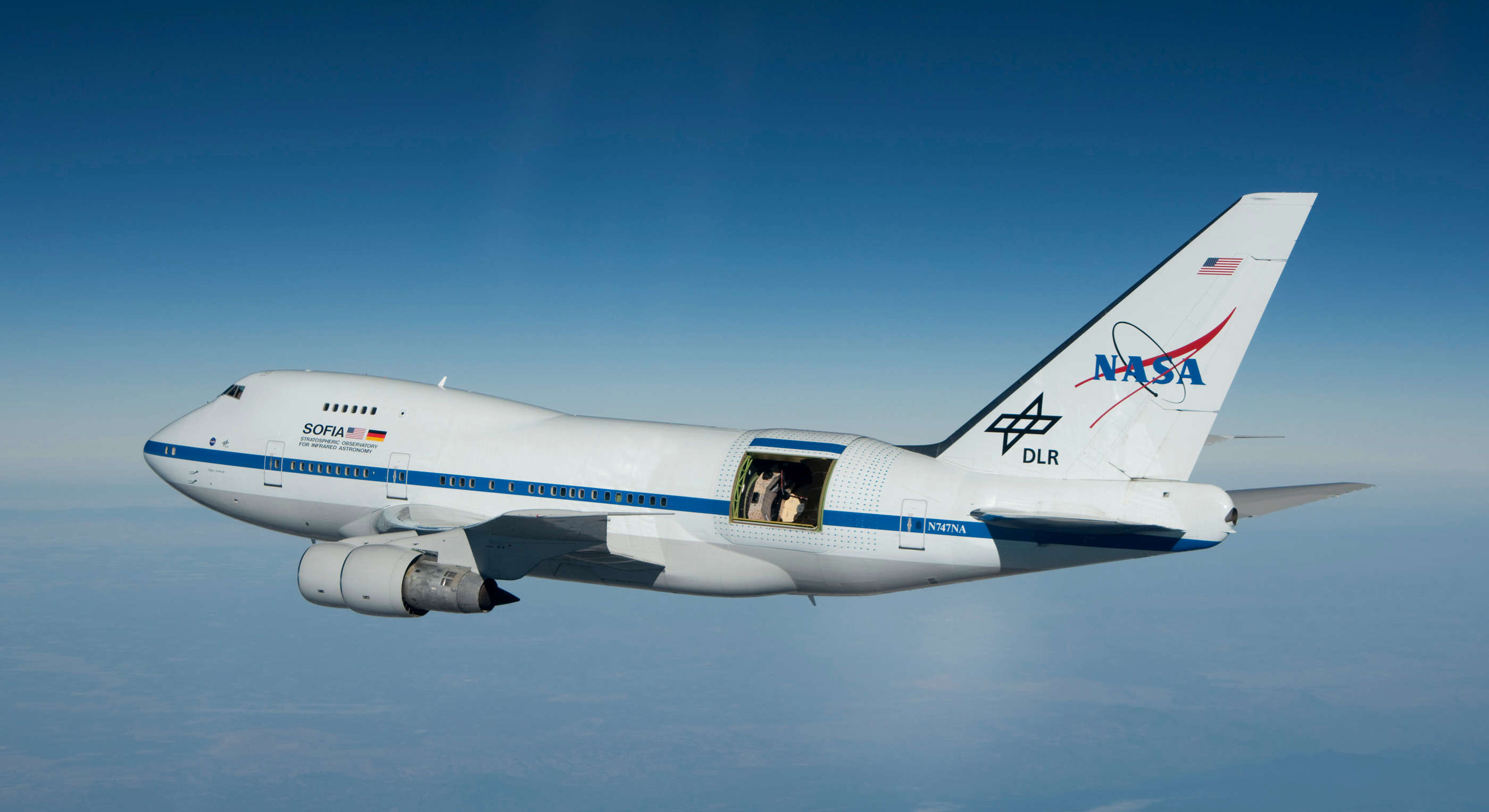 SOFIA Aircraft
The SOFIA aircraft is a highly modified Boeing 747SP (it is a short-body version of the 747, designed for longer flights than the Boeing 747 Classics). A typical 747SP seats 232 passengers versus 624 seats on a 747-400; only 45 747SP jetliners were built.
From 1977 to 1986, the aircraft was operated by Pan American World Airways; from February 1986 until December 1995, it was flying for United Airlines.
In 1997, the airplane was purchased by NASA.
SOFIA's first astronomical observations were carried out in 2010 (Jupiter and the Messier 82 (M82) galaxy).

SOFIA Telescope
SOFIA’s primary mirror is 2.7 meters wide, however the telescope is usually referred to as a 2.5-meter telescope, rather than 2.7 meters, because the optical design requires that only about 90% of the mirror’s reflecting surface (effective aperture) can be used at any one time. Although SOFIA’s telescope is by far the largest ever to be placed in an aircraft, it is only medium-sized when compared to normal ground-based research observatories. However, since the telescope is on an aircraft, it is the largest telescope that can observe the Mid and Far-Infrared that is otherwise inaccessible from the ground.
The telescope's primary mirror blank was cut from a blank of Zerodur (TM) developed by Schott Glaswerke in Mainz, Germany.
SOFIA’s telescope was built in Germany by MAN Technologie AG and Kayser-Threde GmbH.

Science
The telescope and instruments provide imaging and spectroscopic capabilities in the 0.3-1600 µm wavelength range, making SOFIA one of the premier infrared/sub-millimeter astronomical facilities. The telescope is located in an open cavity in the rear section of the aircraft, with a view out of the port side. Observations can be done at elevations between +20 and +60 degrees. The telescope is inertially stabilized and the pointing accuracy is about 0.5 arcseconds. The seeing is expected to be diffraction limited at all wavelengths longward of about 15 µm. There are about 8 hours of observation time on each flight, and at full operations capability there are three flights per week. SOFIA is expected to have a lifetime of at least 20 years.

Scientific goals
SOFIA studies many different kinds of astronomical objects and phenomena, but some of the most interesting are:

And don't forget while writing your paper:
https://www.sofia.usra.edu/science/publications/information-authors